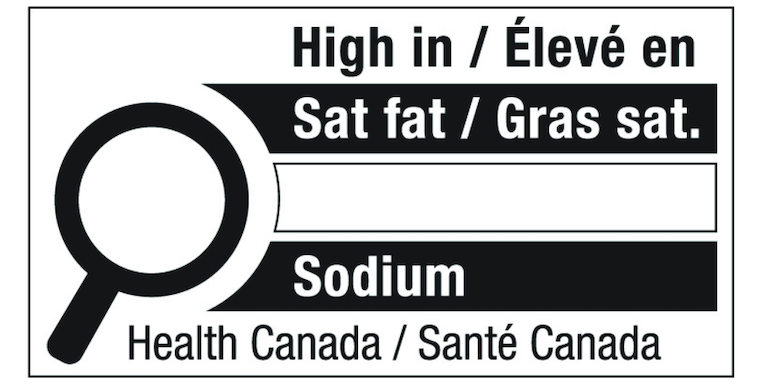 The new nutrition symbol features a magnifying glass and text to draw attention to foods high in saturated fat, sugar and/or sodium to help Canadians make more informed product selections as they shop for groceries, Health Canada said last week. Canada’s health agency noted that the symbol must be displayed on the front of packaged foods with such nutritional content, and manufacturers have until Jan. 1, 2026, to change their labels to comply with the new requirement.

“We want all Canadians to have the information they need to make healthy food choices,” Minister of Health Jean-Yves Duclos said in a statement. “In the coming years, the symbol will make it easier for you and your family to make informed choices. This simple yet effective nutrition symbol will promote healthy eating for all Canadians.”

Manufacturers have until Jan. 1, 2026, to change their food and beverage labels to comply with the new requirement for the magnifying glass symbol.

Fresh foods such as vegetables, fruit, meat and fish, as well as some milk products, won’t need to carry the magnifying glass symbol.

Health Canada said the magnifying glass label is intended to complement the Nutrition Facts table displayed on the back of food packages.

“The new front-of-package labeling regulations will allow consumers to make informed decisions about their food. It also recognizes the nutritional value of certain foods that are either unprocessed or barely processed, such as calcium in dairy products,” according to Marie-Claude Bibeau, Canada’s minister of agriculture and agri-food. “Processors who wish to do so have a few years to review their processes and, in some cases, improve their recipes.” 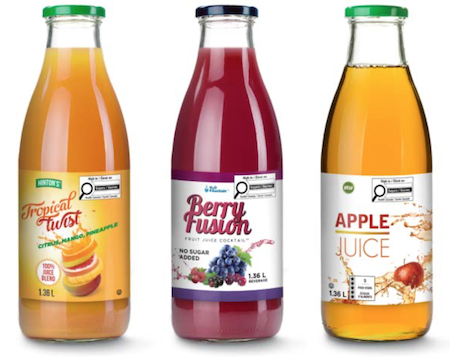 Canada’s Heart & Stroke Foundation, an organization that battles cardiovascular disease and stroke, said Canada joins nations like Chile and Mexico that have introduced similar labelling. A study of Chile’s front-of-package nutrition labels revealed a 25% decrease in sugary drink purchases after 18 months, and 37% of Chileans agreed that the labels led them to make changes to their food choices. In Canada, the new mandatory labels also are expected to spur companies to develop healthier products and reformulate existing foods to avoid the label.

“Canadians get nearly half of their daily calories from ultra-processed foods, and this figure is even higher for our children and youth who are, unfortunately, the biggest consumers of these foods,” explained Doug Roth, CEO of the Heart & Stroke Foundation. “Adding a clearly visible and easy-to-understand symbol on the front of these products will help people quickly spot foods high in sodium, sugars or saturated fat. This is especially true for those who have difficulty with the Nutrition Facts table found on the back of food packages, which can include seniors, people with low literacy, people with poor eyesight and those who speak languages other than English or French.”

Foods high in saturated fat, sugar and sodium are being targeted by the new front-of-package nutrition labeling regulations because of strong evidence linking their excess consumption to added risk of chronic disease, Health Canada reported. Two in five Canadian adults have chronic conditions such as heart disease or type 2 diabetes. The agency said it’s estimated that a reduction of 400mg of sodium per day, achieved over a 10-year period, would result in up to 40,000 fewer cases of coronary heart disease and 23,000 fewer cases of stroke annually.

“Diabetes Canada applauds the government of Canada for taking an important step toward promoting healthy eating through the legislation of front-of-package (FOP) labelling on many of the foods and beverages available in the Canadian marketplace,” stated Laura Syron, president and CEO of Diabetes Canada, which provides diabetes education, research and services. “Simple and consistent FOP labeling is an important tool for promoting healthy options when making decisions on what to purchase and consume. Research shows that, done effectively, food and beverage labeling can inform people of what is in their food, thereby helping them identify and choose healthier products.”

Celebrity Trainer Jono Castano Reveals How To Bulk Like A