Is our love affair with protein healthy? 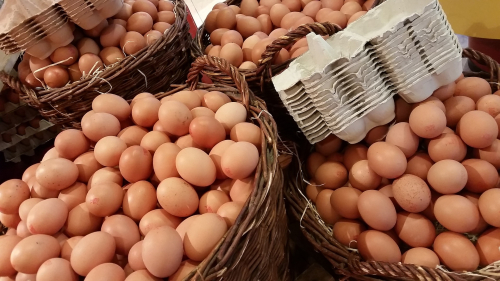 Is our love affair with protein healthy?

Americans are obsessed with protein. Fat and carbs have been vilified – for unjustified reasons for the most part; there’s nothing inherently wrong with these two macronutrients, even though some fats and refined carbs are foods to limit.

Protein on the other hand has gained a health halo, as many people think that eating more of it will build muscle and help them eat less – hence the popularity of protein shakes and powders.

The body requires protein for its upkeep – from 10-35 percent of daily calories should come from protein, or about 0.8 gram of protein per kg of weight. Athletes, children, pregnant and breastfeeding women, and older adults need more protein than the average adult.

Protein malnutrition plagued the world in the past, and is still an issue in some parts of the world. The American diet, however, has abundant sources of protein from plants (nuts, seeds, legumes, soy, grains etc.) and from animal sources (meat, fish, seafood, cheese, eggs etc.). Pair this abundance with our appetite for protein, which drives people to pack a protein bar and jerky in their bag just in case, and most Americans get twice as much as they need.

Too much of a good thing?

What happens with excessive protein?

It does not, as some believe, turn into extra muscle.

If that extra protein replaces other food (perceived as having a macronutrient that’s out of favor, such as carbs), and caloric intake is adequate, you might be missing out on other nutrients that come from foods not as famous for their protein content. Focusing on protein may turn you away from vegetables, many of which also contain protein, among their very many other important micronutrients: 1 cup of broccoli has 3 grams of protein, a third of its dry weight is in fact protein.

If that extra protein makes you exceed your caloric expenditure, its energy will be stored as fat, and you’ll gain weight.

Excess protein is metabolized, its extra energy is stored as fat, other components are broken down and excreted. Protein’s amino acids break down into nitrogen, which is excreted through the urine mainly as urea.

A high protein diet may put extra strain on the kidneys.  This is especially worrisome if there’s an underlying kidney disorder – which is not uncommon, as up to a third of Americans are at risk of kidney disease due to conditions such as diabetes and hypertension.

A new study in Frontiers in Ecology and the Environment looks at how our excessive protein intake affects the environment, especially our waterways.

As mentioned above, the more protein you take in, the more nitrogen you excrete. Multiply that by the US population, and this makes for a significant flow of nitrogen to our waterways. Sewage actually makes 15 percent of the total nitrogen flux from land to ocean in North America. The technology that removes most nitrogen from sewage exists, but it’s expensive, and used on only 1 percent of sewage.

This human contribution of nitrogen to rivers, oceans and lakes results in excessive nutrients in the water, which lead to plant material overgrowth, toxic algal blooms, and hypoxic dead zones. It can make water unsafe to drink. “For most healthy individuals, greater protein consumption has negligible positive health benefits but is potentially deleterious to the environment,” the authors write.

The researchers analysis suggests that if Americans ate the recommended protein amounts it would reduce nitrogen losses into waterways by 12 percent.

If you also take into account the production of our excess protein food – 60 percent of US protein intake is from animal sources – eating the recommended protein allotment will improve environmental stability much further, as the meat industry is a major contributor to greenhouse gasses and nutrient runoff.

Thinking of food as nutrients isn’t serving our health, as protein isn’t in and of itself better than fat or carbs – they’re all necessary, and can come from healthy – or less healthy – sources. Our focus should be on healthy foods and portion control. If, to increase protein intake, you replace a sugary drink with nuts or legumes this is an improvement. But opting for whey and casein protein powders and processed meat instead of whole foods is clearly a nutrition downgrade, regardless of the macronutrients involved. And this protein-overload trend has environmental costs, too.