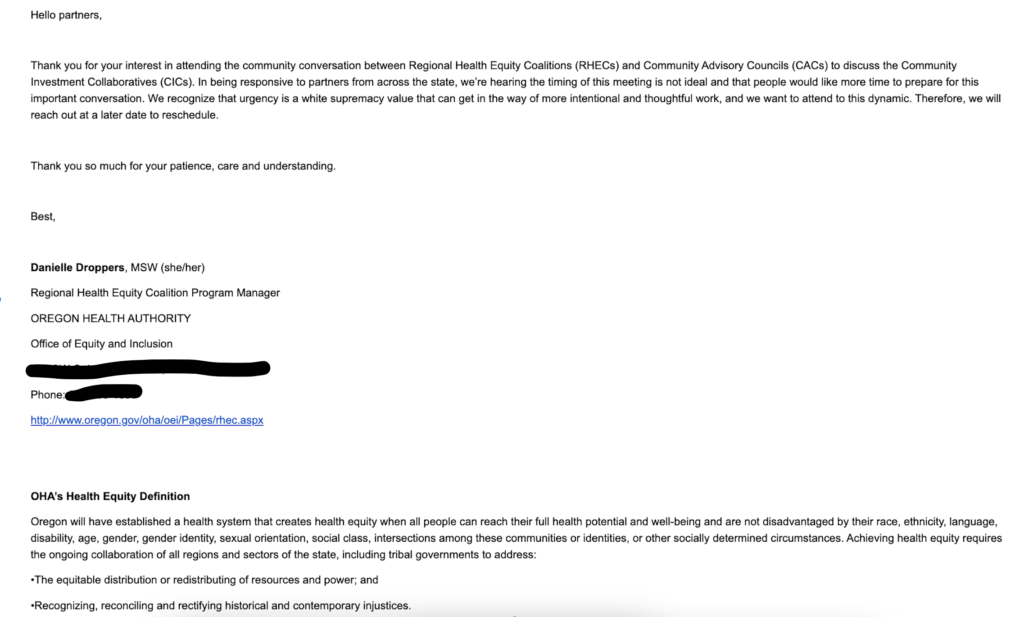 The Oregon Health Authority (OHA) is a government agency that coordinates medical care and social well-being in the Beaver State. During the pandemic, OHA was responsible for coordinating Oregon’s vaccination drive and disseminating information about COVID-19—both vital tasks.

The agency’s office for equity and inclusion, however, prefers not to rush the business of government. In fact, the office’s program manager delayed a meeting with partner organizations on the stated grounds that “urgency is a white supremacy value.”

In an email obtained by Reason, Regional Health Equity Coalition Program Manager Danielle Droppers informed the community that a scheduled conversation between OHA officials and relevant members of the public would not take place as planned.

“Thank you for your interest in attending the community conversation between Regional Health Equity Coalitions (RHECs) and Community Advisory Councils (CACs) to discuss the Community Investment Collaboratives (CICs),” wrote Droppers. “We recognize that urgency is a white supremacy value that can get in the way of more intentional and thoughtful work, and we want to attend to this dynamic. Therefore, we will reach out at a later date to reschedule.”

Droppers did not immediately respond to a request for comment.

The email was sent from Droppers’ state government email address, and drew sharp rebukes from many who received it. One such community member replied that “as a person of color, I am calling BS!” Another recipient, a health equity manager at a medical group, said she was “thrown” by the claim.

“Please, educate me on what the state means by urgency is a white supremacy value,” she wrote. “Also, I would like to know how this gets in the way of the RHEC/CAC work. I have struggled all morning with how to communicate the reason for the postponement to our CAC.”

Droppers did not follow up on her initial email with an explanation. A county health official, however, responded that “I too was taken by surprise on the statement and decided to investigate it for further comprehension and wanted to share a link that I found.”

The link redirects to a website that purportedly identifies aspects of white supremacy culture. The website was “conceived and designed” by Tema Okun, a white antiracist educator who has popularized the idea that several benign and widespread traits are actually characteristic of white supremacy. Among these are preferring quantity over quality, wanting things to be written down, perfectionism, becoming defensive, and yes, possessing a sense of urgency.

Okun’s work makes frequent appearances in educational equity workshops; similar work by Judith Katz, also an antiracism expert, was included on the website for the National Museum of African American History and Culture.

Okun’s work is not critical race theory (CRT), a catchall term now used by many conservatives to describe all progressive antiracism activism. But it’s often adjacent to CRT in diversity, equity, and inclusion training materials, and has clearly made inroads in education settings.

It also appears to be slowing down the operations of a taxpayer-funded agency in Oregon. The community’s frustration is understandable: Government employees who are unprepared for meetings should not cite white supremacy as their excuse.